First in Flight – The Card That Started It All 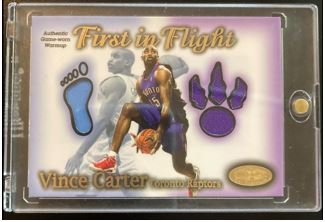 5, 4, 3, 2… jumper at the buzzer and it’s GOOOOD. Bulls win, Bulls win. Moments like this replayed in gyms and driveways across the world. I was a huge Jordan fan growing up. I wanted to be like Mike. I couldn’t dunk, barely good enough against high school talent but Jordan’s tenacity on the court, his sheer determination to never give up became a quality I brought into my everyday life as well as on the court.

As Jordan’s career started to come to an end another player came onto the scene. Vince Carter, or Air Carter, was poised to be the next MJ. It was around that time I really started collecting sports memorabilia. I went to the LCS (Local Card Shop) and purchased a box of 2000-2001 NBA Hoops. I do not recall which pack of the box it was, but I pulled (this is what hobbyists call when opening packs of cards) Vince Carter First in Flight card 0128/1000. It is made with a piece of authentic game-worn warmups from his college playing years at the University of North Carolina Tarheels and his NBA pro team Toronto Raptors.

I acted as if I won the lottery though in the card world, I did. Vince Carter, one of my favorite players and here I have a card made from material HE wore. 22 years later I still have the card and I still remember the excitement from that day.

Those of you who have kids that collect cards, or collect yourself, have been able to witness and experience this excitement. I’m sure you can appreciate when I say that I wish we could bottle up that emotion and share it with the world. This is what Jerseys for Juniors wants to do. We want to create these moments for juniors who for any number of reasons can’t; to provide sports memorabilia or sports equipment so they can have something to keep and remember for the rest of their lives.

You see, there is something magical about sports that happens behind the scenes. Dreams are created, hope is established and at some point, will bring a sense of nostalgia whether it is owning a card, helmet, jersey, watching a game or meeting your favorite player.

This is the card that started it all – and with your donations, Jerseys for Juniors will create these exciting moments for juniors across the United States.